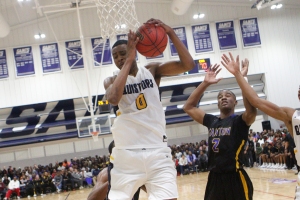 Fresh off his first state championship, D.J. Jeffries committed Monday night to the University of Kentucky.  Jeffries had narrowed his college selections down to Kentucky, Alabama, and Missississippi State.  Many felt MSU was a long shot, but nonetheless, they were in the mix.  Jeffries graduates in 2019.  Committing early makes the transition to college smoother and takes the pressure off for a year.  The 6’7” five star recruit is currently ranked #17 nationally by ESPN, #26  by 247 Sports, and has taken the reigns as the #1 player in MS.  Coach John Calipari came to the Mississippi coliseum last week to him play.  It is reportedly the second Coach Cal came this month.  Jeffries committing to UK early makes it easier for the coaching staff at UK to continue recruiting Jeffries AAU teammate, James Wiseman, the #1 overall player for 2019.  Jeffries and Wiseman played on Penny Hardaway’s TEAM PENNY team that plays on the NIKE circuit.

This site uses Akismet to reduce spam. Learn how your comment data is processed.